Ovarian cysts are fluid-filled sacs that develop in or on the ovary. Ovarian cysts occur commonly in women of all ages.

Ovarian cysts are fluid-filled sacs that develop in or on the ovary. Ovarian cysts occur commonly in women of all ages. Some women with ovarian cysts have pain or pelvic pressure, while others have no symptoms. Irregular menstrual periods or abnormal vaginal bleeding are not usually related to an ovarian cyst.

Fortunately, most ovarian cysts do not require surgical removal and are not caused by cancer. Cysts can vary in size from less than 1cm to greater than 10 cms.

There are many different types of ovarian cysts but in general they may be classified as:

– The following is based on the most up-to-date data from Cancer Research UK: 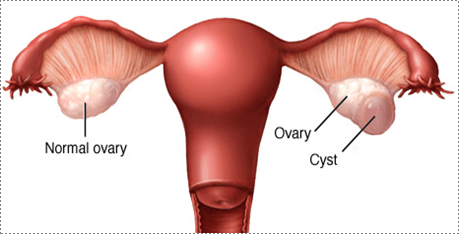 Postmenopausal women — Ovarian cysts are common in postmenopausal women. The greater use of ultrasound in gynaecological practice and the widespread generalised use of other imaging techniques such as computed tomography (CT) and magnetic resonance imaging (MRI) mean that an increasing proportion of these cysts will be found incidentally.

Ovarian cysts may be either symptomatic or asymptomatic. Women with symptoms from ovarian cysts typically experience pain or pressure in the lower abdomen on the side of the cyst.

Complications from ovarian cysts are often referred to as ‘Ovarian cyst accidents’. Examples include:

Pain may be dull or sharp; it may be constant or come and go.

Ovarian cysts can sometimes be detected during a pelvic examination. However, most ovarian cysts are diagnosed by imaging – pelvic ultrasound scan is the usual imaging modality used. Computed tomography (CT) scan or magnetic resonance imaging (MRI) are also sometimes used, but less commonly.

Blood testing — One or more blood tests may be recommended if you are found to have an ovarian cyst. The blood test(s) can help to determine the nature of the cyst.

Ovarian cysts do not always require treatment and may resolve on their own. Decisions will be made based upon the results of the imaging test, your age, symptoms, results of blood tests and your family history. Your healthcare provider may recommend:

Surgery to remove an ovarian cyst — Most ovarian cysts can be surgically managed using a laparoscopic approach (‘key-hole surgery’) – See TREATMENTS page for more information regarding laparoscopy. Occasionally a laparotomy (larger incision in the abdomen) may be required.