In a normal menstrual cycle, a woman loses an average of 2 to 3 tablespoons (35 to 40 millilitres) of blood over four to eight days. However, some women have heavy or prolonged menstrual bleeding.

In a normal menstrual cycle, a woman loses an average of 2 to 3 tablespoons (35 to 40 millilitres) of blood over four to eight days. However, some women lose a lot more blood. This is referred to as heavy or prolonged menstrual bleeding, and has also been called menorrhagia. Most women have a menstrual period every 24 to 38 days (that is, the time from the first day of one menstrual period to the onset of the next); the average is every 28 days.

Women who lose 5 to 6 tablespoons (about 80 millilitres) of blood or more during their menstrual period are said to have heavy or prolonged menstrual bleeding. Losing a lot of blood during the menstrual period can cause medical problems such as anaemia (low red blood cell count). 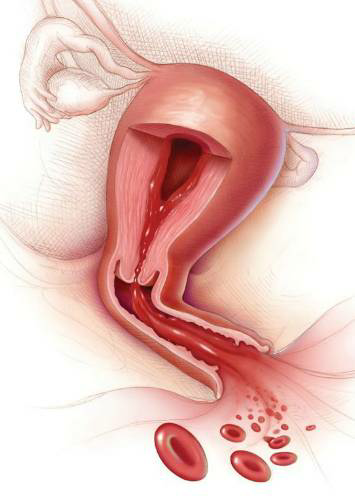 The most common causes of excessive menstrual bleeding are:

Anovulation — Anovulation occurs when your ovaries do not produce and release an egg (ovulate) once per month. This causes your menstrual period to be irregular or absent. Anovulation is common in adolescents and in women who are near menopause. Women with polycystic ovary syndrome (PCOS) often do not ovulate regularly.

Women with heavy or prolonged menstrual bleeding typically have one or more of the following:

When to seek urgent help — If you soak through 2 pads/tampons in one hour (for two hours in a row), you should see your GP urgently or attend the Accident & Emergency department. Bleeding this heavily can be serious or even life threatening.

If you have heavy menstrual bleeding your doctor will want to perform a clinical assessment, including a pelvic examination. Depending on the history and examination findings, the following tests/investigations may be requested:

The best treatment of heavy menstrual bleeding for you will depend on:

Your doctor will probably recommend treatment with one or more medicines first. If these treatments do not reduce bleeding enough, a surgical treatment might be an option.

The advantages of antifibrinolytic medicines over other medical treatments are that:

Gonadotropin-releasing hormone (GnRH) agonists — GnRH agonists are a type of medicine that can be used to temporarily reduce menstrual bleeding. This treatment might be recommended for women who are waiting to have a surgical treatment.

For women who have ‘growths’ in the uterus, such as polyps or fibroids, having a treatment to remove the growth can reduce or end heavy bleeding – see sections on ENDOMETRIAL POLYPS and UTERINE FIBROIDS.

Other surgical treatments for menorrhagia include:

Endometrial ablation — This is a treatment that destroys or removes most of the lining of the uterus. This can reduce heavy menstrual bleeding or cause you to stop having menstrual bleeding. It is not a good option for women who might want to become pregnant in the future and may not be appropriate for women whose abnormal bleeding is caused by anovulation. The cause of the bleeding should be identified before endometrial ablation is performed – see section on ENDOMETRIAL ABLATION.

Hysterectomy — Hysterectomy is a surgery that removes the uterus. This is a permanent treatment that cures heavy menstrual bleeding. However, the surgery has a risk of complications and may require up to six weeks for full recovery. Hysterectomies may be performed laparoscopically (‘key-hole’), vaginally or via laparotomy (larger incision in the abdomen) – see section on HYSTERECTOMY.