Fibroids are non-cancerous ‘growths’ within the uterus/womb. They are also called uterine leiomyomas or myomas.

Fibroids are ‘growths’ within the uterus/womb. They are also called uterine leiomyomas or myomas. In technical terms, fibroids are benign monoclonal tumours arising from the smooth muscle cells and fibroblasts of the myometrium. In simple terms the uterus is comprised predominantly of muscle and fibroids originate from within the muscle of the uterine wall.

Fibroids can remain within the wall of the uterus (intramural), bulge into the uterine cavity (submucosal) or bulge outwards from the uterus (subserosal). Fibroids are not cancerous and are not thought to be able to become cancerous. However, it can sometimes be difficult to determine if a mass in the uterus is a common fibroid or a rare cancerous tumour. 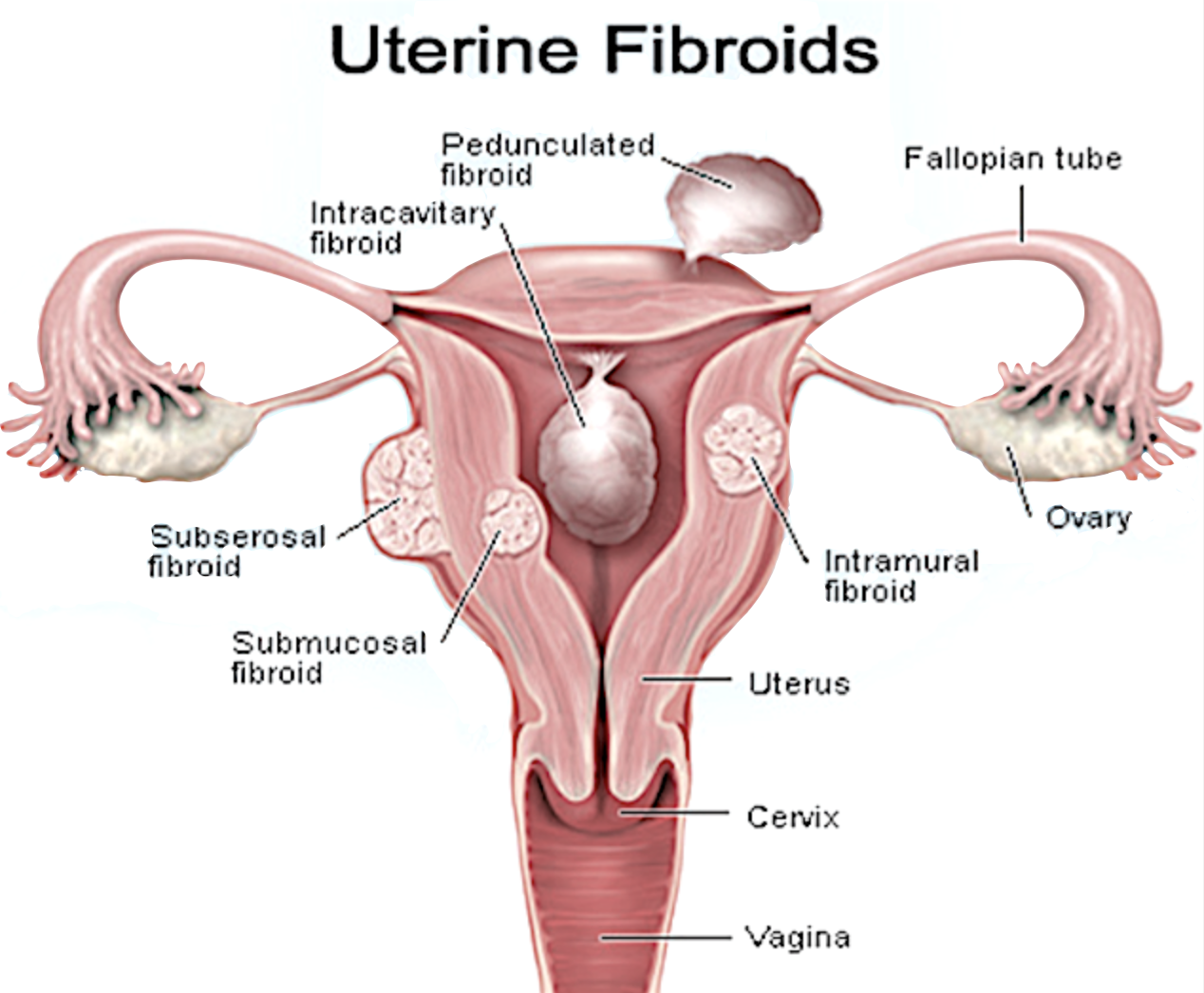 Fibroids are common; in fact they are the commonest benign pelvic tumour in women. However, the majority of women with fibroids will not have bothersome symptoms. Treatments are available for women who have fibroid-related problems like heavy menstrual bleeding, pain/pressure in the pelvis, or reproductive problems such as miscarriage or subfertility. It is important to note that many of these symptoms are common and may have other causes i.e. not always due to the presence of fibroids. Management of symptoms should take into account the number, size and location of fibroids.

Fibroids are more common, more severe and occur at an earlier age for women of African descent. We do not understand why this is true.

The origin or pathogenesis of fibroids is not well understood and has been the subject of much research.

Fibroids seem to respond to the female hormones (oestrogen and progesterone) and some women have specific genes that may predispose them, and their families, to fibroids. Certain lifestyle and reproductive factors are thought to influence fibroids.

Some fibroids grow with time and others shrink. Fibroids can also have growth spurts where they grow quickly over a short period of time.

Fibroids can range in size from microscopic to the size of a melon or even larger. The majority of fibroids are small and do not cause any symptoms at all.

Fibroids are more likely to cause symptoms if the fibroids are large, if there are many fibroids, or if the fibroid is located in certain places in the uterus. Fibroid symptoms tend to get better when a woman no longer has menstrual periods, at menopause.

Fibroids can also cause other symptoms, depending upon the size and where they are located in the uterus. As an example, if a fibroid is pressing on the bladder, the woman may feel like she needs to go to the bathroom frequently. Similarly, a fibroid pressing on the rectum can cause constipation.

Problems with fertility — Most women with fibroids are able to become pregnant without a problem. However, certain fibroids that distort the inside of the uterus can cause trouble becoming pregnant and removing these fibroids can optimise fertility. Fibroids in the outer part of the uterus may have a mild effect on decreasing fertility, but surgically removing these fibroids does not appear to decrease the risk. Studies show that, while women with fibroids may be more likely to have miscarriages than women without fibroids, the increased risk of miscarriage is usually related to other factors such as advancing age rather than due to the fibroids. Women with fibroids and reproductive problems should go through a subfertility or miscarriage evaluation before concluding the fibroids are responsible for the problem.

Pelvic ultrasound is the main imaging technique used to diagnose fibroids. MRI scans are sometimes performed to better define or ‘map’ out the fibroids. A doctor or other health care provider may suspect fibroids if your uterus is enlarged or has an irregular shape. Sometimes fibroids are discovered incidentally during tests for another condition e.g. during a CT scan.

Women who have no symptoms from their fibroids do not need to have treatment. Women with fibroid-related symptoms may be offered a range of treatment options. Treatment depends on which symptom(s) is most bothersome. The size, number and locations of fibroids and your desire for future pregnancy also factor into most treatment decisions.

Iron — For women who have iron deficiency anaemia e.g. due to heavy or prolonged menstrual bleeding, will often benefit from taking an iron supplement such as Ferrous sulphate, Ferrous fumarate or Ferrous gluconate.

Nonsteroidal anti-inflammatory drugs (NSAIDs) — NSAIDs such as ibuprofen or mefenamic acid can help reduce menstrual cramps and decrease menstrual flow in some women.

The advantages of antifibrinolytic medicines over other medical treatments are that:

Hormonal methods — Hormonal methods, often used for birth control, can be used to reduce bleeding, cramps, and pain during your menstrual period and can correct anaemia. These can be administered utilising a number of different routes including orally, skin patch, vaginal ring, injections, hormonal ‘coils’ (Levonorgestrel intrauterine system) and implant.

Your doctor might recommend a surgical or interventional treatment for fibroids if:

Myomectomy — Myomectomy is a surgery done to remove fibroids which can reduce both bleeding and size related symptoms. Most women who have myomectomy are able to have children afterwards.

There are several ways to perform myomectomy; the “best” way depends on where your fibroids are located and the size and number of fibroids.

Hysterectomy is a permanent treatment that cures heavy menstrual bleeding and the bulk of related symptoms of fibroids. However, it is major surgery, and you will need up to 4-6 weeks to fully recover.

(See Uterine Artery Embolisation in the Management of Fibroids )

Magnetic resonance guided focused ultrasound — Magnetic resonance guided focused ultrasound surgery (MRgFUS or FUS) is a more recent fibroid treatment option. This option is only available in a few tertiary centres and a number of criteria need to be met. This non-invasive treatment takes place in a MRI machine, which guides the treatment. Multiple waves of ultrasound energy go through the abdominal wall and converge on a small volume of tissue, which leads to thermal destruction of the fibroid.